Floating in Space: My Visit to a Sensory Deprivation Tank

“Sensory deprivation tank.” It sounds like a torture device.  To be deprived of something certainly has negative connotations, and senses seem pretty essential.  Obviously the people who originally named these things were not thinking of marketing opportunities.

Now, most spas that use them call them “float tanks.”  I would say this is a far more accurate description of the experience: floating weightlessly, timelessly in empty space. Probably the closest I will ever get to being in actual space, which is sort of what it feels like.  In a float tank, you are shut off to sound and light, and there is body-temperature water saturated with epsom salt in the bottom of the tank. The salt makes you buoyant- to the point that you can literally nap in the tank with no worries. Because of the temperature of the water, there is the sensation of “floating” in nothingness.  Here are some pictures of the tank.

I first tried the sensory deprivation tank on a little bit of a whim last July.  I think my husband Jamey had read something about them and mentioned it to me, and I decided to look at a few articles online.  I was several months into a meditation practice, and the promises to increase the “meditative state” I read about appealed to me.

At the time, there was not a single place in Columbus to check out one of these things, so I drove almost an hour to Gravity Spa in Beavercreek, Ohio by myself to have a float experience.  I had chosen a package where I got an hour massage and an hour to float.

(Now, there are at least two places I know of that are closer- both in downtown Columbus and in Powell less than twenty minutes from me.  This obviously speaks to the growing acceptance of this practice as a tool for relaxation and wellness.)

I have to say I was nervous before entering the tank.  While I had read a few articles about it, there were varied descriptions of the experience ranging from “transcendental” to “panicked.”  My own first experience was neither of these things completely. It began with a little panic for sure.  When I first closed the door and was enveloped in the moist, warm air in total darkness, I had a slightly claustrophobic feeling.  The woman who brought me to the room told me to stretch out my body, lean back my head as far as I could, feel the sides of the tank.  All of these things helped.  To me, the strangest part of the experience was the vision aspect.  There was nothing to see, and yet my eyes kept searching for awhile.  When they did “adjust” the experience was so peaceful I often couldn’t tell if I was asleep or awake.  I had the feeling of rotation or movement, but I was unsure whether I was really moving at all.

Overall, I would say it was a very interesting experience, and afterward, I felt a fuzzy kind of good and relaxed that lasted for a few hours, and I wanted to do it again- for longer next time.  I kept worrying if I fell asleep I would miss the whole thing, and I was so relaxed I almost fell asleep often in the hour.

A week or so ago, I had my second experience with the float tank.  I had praised the first experience to my family and probed for interested parties who might want to go with me. This resulted in a “reciprocal gift” where I got a spa visit for my birthday and my mom got one from me for Christmas, so after quite a few months, we finally made the visit together.

My mom did the package massage and float, and I had opted to go for a two-hour float this time (which was the same $90.00 price).  I had no nervousness at all this time.  I was mostly excited to experience the float again.  When I got in the tank, it felt much as I had remembered, minus the panic.  One thing that felt strange at first was the fact that I could feel my body’s tension in particular places quite a bit more- for example, my shoulders were aching.  When I noticed this, at first it was uncomfortable, but then I started stretching in the water and slowly I began to relax more and more until I felt no pain at all.

I had the same experience this time of floating between a conscious and unconscious state when I had my eyes open.  I also felt the same total relaxation and urge to sleep.  I would say that the main difference was the fact that last time, I couldn’t even hear the music they played at the end to let me know the time was over, and by the end this time, I felt a little more ready to leave the tank and heard it right away (after two hours as opposed to one).

After this most recent float, I found the fuzzy happiness to be equally as affecting, and I would say it lasted longer than last time.  For the rest of the day, I felt very peaceful and satisfied.  Perhaps even for a few days after.

On Gravity Spa’s website, they talk about one of the benefits of floating being increased creativity.  They have been experimenting with the idea for awhile.  The last time I came a year ago, they had an page on their website offering free or discounted floats to artists who would agree to make art inspired by the tank.  When I came this time, the common space between the rooms for floating and massages was filled with collaborative art created in pieces by people who had just left their float experience.

After floating, guests are encouraged to add to the collaborative art piece in process, which I decided to do afterward.  I can’t say the piece was one of creative genius, but it was really fun to do.  My mom decided not to paint, but was gracious enough to pose with the work in progress. 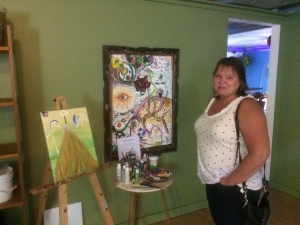 It was my mom’s first time, and when she described her experience, it sounded very similar to my first time. At first she was nervous and had to work past a little panic.  Then she found herself falling into deeper and deeper levels of relaxation and very much enjoyed the experience.  On the ride home, we both seemed a little “blissed out.”

So, would I recommend this experience to others?  Absolutely.

Time magazine just wrote an article about float tanks and their health benefits.  Below are some other articles you can read online for additional information and perspectives. Many of them address the “mystique” behind the tanks and their connection to the counter-culture movement, but I think that generally they are good for anyone who wants a super-relaxing experience where he or she can totally shut down to the outside world for awhile.  You do not have to be looking for mysticism or altered states to enjoy the benefits.  If you do have a mindfulness practice, my experience is that it is a good way to go a little deeper as well.

Have ever floated or are you interested in checking it out?  Feel free to share your experience in the comments section or by contacting me via the “Contact” tab.